With all the strife in the world there’s been a lot of talk about magical workings.  It seems a number of people feel that the world’s ills can be basically attributed to negative magical workings.  On top of natural disasters, geo-political strife, global economic failures, we have rancor and blistering arguments among us causing a great divide.
Sometimes we feel helpless over such overwhelming events.  Sometimes things seem so out of control it feels as if we are only stopping the gaps in our lives.  Sometimes we feel betrayed and friendless.  It’s no wonder that we feel as if there is a dark force out there and terrible magic has been let loose.
But we are good people right?  We are hard working, sensible, compassionate people who are doing all they can to better our situation.  We’ve looked to ourselves, meditated on our role in “the mess we’re in” and studied all the mundane reasons for our situation.  We’ve done everything we can, so it must be magic.
Well, I’m not here to doubt that.  I believe in magic.  I know it works.  If you say you have done all things possible in the mundane, and have worked hard to strengthen your being, I will not argue that it is magic.
What I’m here to say is “So what?”  Let’s just make that assumption.  Terrible* magic has been unleashed.  It is powerful enough to slowly erode your good life.  Well, what are you going to about it?  Are you powerless?
We are all witches.  We make magic.  We are magical beings.  We are descended of the gods and are Godbeings ourselves.  We are made of power and, whether you realize it or not, every act we make is power.  We are not subject to another, in any way, shape or form.  We are virgin forms, independent, unsullied by an angry hungry touch.
Terrible magic has been unleashed.  Make some terrible magic of your own.  Rise up and stir the cauldron.  Focus your energies in keeping a cone about you.  Live in that cone.  The Fey are wild beings with great power, use it.  It is within you, it is inherent.  Take control, take it.  It’s already yours, it’s been waiting for you.
Take control.  Make Kala a daily exercise.  Continue to align your soul.  Work the Iron and Pearl.  Terrible magic requires a terrible price.  It requires that your daily “practice” becomes your entire life.  It requires that all you do become a conscious act of magic.  It requires you to transform your existence from the very core.  And it requires that you first know what that core is.
Understand that your daily practice will not be enough to safely make terrible magic.  But if you want your life back, then take control.  Know who you truly are, know what you want and be clean about it.  Fight power with power.  As Victor would say “Just do it!”
* * terrible defined:  causing awe, or extremely formidable.
Posted by Anaar at 12:12 PM 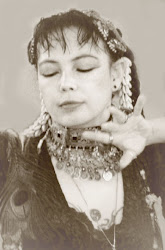 Anaar
I am a graduate of the Victor Anderson school of madness. Greatly influenced by the mad poet, I have sought to create works of great mystery and power. My aim is to bring you dark imaginations, intense pleasures, sacred emotion and fierce beauty. I have a Masters degree in Arts and Consciousness and have spent nearly two decades studying the relationship between The Sacred and its expression through the Arts. I am known for my intense and passionate improvisational themes and for storytelling through dance. My unique handcrafted costumes and dance accessories not only pushes the boundaries, but have also won awards, and earned a permanent home in the Textile Research Centre in Leiden, The Netherlands. I teach both the Feri Tradition and sacred dance internationally and released my first dvd, Dark Imaginations.